London, United Kingdom–(Newsfile Corp. – November 11, 2021) – Within the first hours of its launch, MoonBear.Finance has become a family of over a thousand holders and has been listed on CoinMarketCap and CoinGecko. Following their fair launch, MoonBear.Finance operates a community-oriented structure and it is in the process of building a revolutionary new staking platform. The project concept is a hybrid of projects like Shiba Inu and SafeMoon due to its tokenomics, and projects like HEX due to its staking platform. There is a small 4% fee attached to buying tokens, and the MoonBear Finance project has been built to be immune to the market dynamics due to its supercharged tokenomics. Until now, Moonbear has been audited and approved by TechRate and BlockAudit . 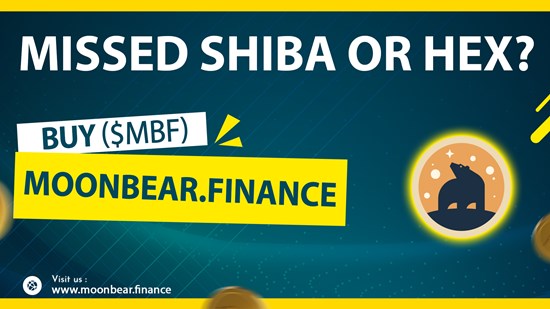 MoonBear.Finance ($MBF) has been working tirelessly to build a new-age staking platform that can compete with giants like HEX and create generational wealth. It is really close to its launch which is planned to happen on 15th November 2021 22:00 UTC time.

On the first days after launch, the team planned to reward its first stakers with a prize pool of more than $150,000. The rewards will consist of a combination of MBF token and BUSD and will be credited to all who stake within the first 72 hours. The platform has been built in a way so smaller investors can earn more tokens than the bigger ones, just by increasing their staking time period (what we refer to as “longer pays better”). And by being a MBF staker, people will be able to earn both MBF and stable rewards in the form of BUSD.

Their staking platform has been built in a really simple way so no matter what experience people have they will be able to stake and earn passive rewards. By keeping their tokens staked, participants will get rewards from the staking pool that will grow with each buy and sell transaction. And that’s not all; there will be additional rewards the team have decided to make a few times per year, known as”Bear Pay Days,” in which even more rewards will be distributed to the stakers.

Moonbear.Finance tokenomics are designed to ensure that every user gains from the platform-based transactions and the token value remains high. There will be a small 4% buy fee that will support the project’s marketing efforts and staking pool. Every sell transaction invites a 15% transaction fee, and it is divided into eight components where 3% goes to marketing and rewards each, 3% is burned, 3% is rewarded as stable coin to stakers, 1% is sent to a liquidity pool, 3% is used for MBF token buyback, 1% is shared across the team, and 1% is donated to charity. The 15% tax is also imposed to encourage holding the $MBF tokens and dissuade the users from selling.

MoonBear.Finance is a community-driven cryptocurrency project that helps investors to earn real passive rewards through its groundbreaking staking platform. The sellers of $MBF are charged 15%, and buyers only 4%. Launched with no initial burn, MoonBear.Finance decided to burn 3% of each sell transaction and make it deflationary to strive for increasing the price consistently. Going forward, the platform developers are on the path to launch not only the best staking platform but a bear charity voting option, an NFT marketplace, and much more.

To view the source version of this press release, please visit https://www.newsfilecorp.com/release/103076