Welcome to part five of our series of articles designed to help you understand the flow of money through different types of cryptoassets. Over the course of this series of articles, we’ve examined historical trends which appear to drive a predictable sequence of investor behaviours following a Bitcoin price rally. Read on if you’re new to the series, or skip directly to “How to prepare for alt season” if you’ve followed the series.

Part one of this series examined why Bitcoin tends to be the first to move, its power to usher first-time crypto investors into the fold and how that has been shown to trigger the flow of money we are discussing in this series.

Part two looked at why Ethereum tends to be next to move. We explained that this is primarily due to its sheer size (Ethereum is the 2nd biggest crypto asset by market cap) and because it supports an entire ecosystem of applications and services.

Parts three and four examined how, in 2021, we saw several large-cap altcoins keep pace with Ethereum rather than rallying after Ethereum’s price spike, as they have in the past. This can mainly be attributed to the fact that the large-cap altcoin space is now a larger and more diverse sector, which includes several real competitors vying for Etheruem’s throne as the king of smart contracts.

Now, within the span of 2 weeks, we’ve seen Ethereum, Solana and Polkadot break their all-time highs and explore previously uncharted price ranges. Large cap altcoins moving together like this is considered a good sign that the next phase of the crypto price cycle may be upon us. This phase is called an alt season.

Given that an alt season is characterised by multiple altcoins simultaneously experiencing rapid upward price movements, how can the average crypto investor ensure that their portfolio is in a position to benefit? Let’s take a look.

How to prepare for alt season

Alt season is the crypto term for a period where alternative coins outperform Bitcoin, presenting a far wider range of investment opportunities than a focussed Bitcoin rally. For many, a winning strategy is simply going all-in on the one blockchain technology that they believe has the most potential. Making that decision requires a substantial amount of research and a deep understanding that extends beyond just Bitcoin and Ethereum.

If only there was a way to benefit from alt season without having to lock yourself away for weeks to research an expanding list of disruptive blockchain technologies.

Well, the good news is, there is.

It’s called diversification, and in this article, we’re going to look at why that’s not just a word that Wall Street bankers use.

First-time crypto investors tend to buy Bitcoin because it’s the least volatile and best-known cryptoasset in the market. For many, moving money out of Bitcoin and into more volatile altcoins is scary. So it’s important to consider objective, verifiable data when deciding whether or not an alt season really is playing out.

The graph below shows us the total crypto market cap – or the total value of all cryptoassets – excluding Bitcoin. In other words, the line shows the value of all altcoins combined over time. 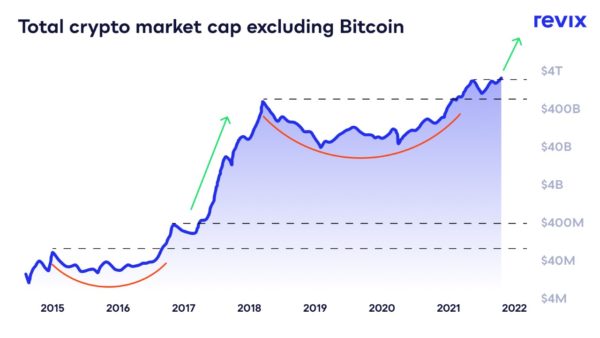 At first glance, it’s clear that this graph is following some sort of repeating pattern. We can see startling similarities between the two highlighted periods, namely, 2014-2018 and 2018-present.

The 2014-2018 period shows an accumulation phase (red line), followed by an alt season (2017 price rise). We can see from the above graph that a similar accumulation phase has taken place in the 2018-2021 period. What’s more, we are currently in the same stage of the crypto price cycle as we were when the 2017 alt season kicked off.

If the pattern continues to follow the shape laid out in 2014-2018, then it could mean that this is only the beginning of yet another alt season.

Why it’s hard to pick a winner

In just 4 months, Solana’s price has shot up 574%, while rival Cardano has grown by just 52%. While investors who bought into Solana before its epic price rally are no doubt overjoyed by their returns, they would invariably have had to buy in without any real certainty that Solana would outperform a close competitor like Cardano so resolutely.

Every alt season has seen a small number of altcoins set price growth records, while others see more moderate gains. The fact is, even for seasoned analysts and market researchers, predicting which altcoin is going to outperform all others involves some element of luck. 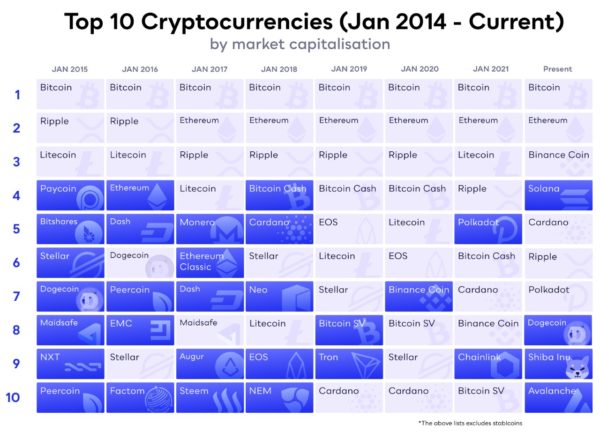 The table above shows the top 10 cryptoassets by market cap from 2015 to present day. The cryptoassets highlighted in blue represent the newcomers to the Top10 when compared to the previous year. It’s remarkable to see how significantly this list has changed year on year. This table shows a clear demonstration of just how difficult it is to accurately predict which cryptoasset will succeed or which will become a fly-by-night coin.

So how do we pick the winners? We don’t have to.

Diversification is easier than you think

In the world of cryptoassets, diversifying simply means investing in several different cryptoassets. By doing this, you are spreading your risk across multiple investments with exposure to various sectors rather than putting everything you have into a single cryptoasset.

The idea is that by exposing your portfolio to multiple cryptoassets, you’ll stand to benefit from uncorrelated returns.

Sure, you won’t realise the same returns as you would have if you went all-in on the highest performing cryptoasset, but on the flip side, you won’t risk having all your eggs in one basket. Instead, via diversification, you spread the risk and benefit from a far less volatile ride along the way.

Building a diversified crypto portfolio still requires that investors do their own comprehensive research, decide which cryptoassets are best to hold for exposure to certain market sectors, and constantly reweighting their portfolio to keep in line with the fast-paced nature of the crypto market. This is clearly neither a simple task nor a time-efficient task.

Revix, a crypto investment platform based in Cape Town, was founded to solve that very problem. In addition to making it easy and safe to buy individual cryptoassets, Revix’s claim to fame is its crypto Bundle offerings.

In the same way, you would buy into the JSE Top40, Revix bundles allow you to invest in a group of cryptocurrencies seamlessly.

The Top 10 Bundle is like the JSE Top 40 or S&P 500 for crypto and provides equally weighted exposure to the top 10 cryptocurrencies making up more than 75% of the crypto market. This bundle includes all the cryptocurrencies mentioned in this article and has significantly outperformed Bitcoin over the last 12 months.

The Smart Contract Bundle provides equally weighted exposure to the top 5 smart contract focused cryptocurrencies like Ethereum, Solana and Polkadot that enable developers to build applications on top of their blockchains, similar to how Apple builds apps on top of its OS operating system.

The Payment Bundle provides equally weighted exposure to the top 5 payment focused cryptocurrencies looking to make payments cheaper, faster and more global. These cryptos include the likes of Bitcoin, Ripple, Stellar and Litecoin.

Revix’s bundles have outperformed an investment in Bitcoin alone over a one-, three- and five-year time period.

What’s more, if a new cryptoasset manages to meet the criteria that Revix’s bundles are based on, Revix will automatically reweight the bundle, keeping your portfolio bang up to date with the fast-moving world of cryptocurrencies.

This graph shows the performance of Revix’s Bundles over the last year.

And It gets even better!

Revix Bundles are built on a direct indexing model, which means, unlike an ETF, Revix purchases and holds the underlying assets on your bemillhalf. It was also the first crypto platform in South Africa to opt into and pass a third-party audit of these assets, conducted by Mazars.

So not only do you gain diversified exposure to alt season at the click of a button, but you also get the security that an audited company is looking after your assets.

Between the 12th of November and the 18th of November, you’ll pay zero fees when you buy the Top10 Bundle, Smart Contract Bundle or the Payment Bundle with ZAR or GBP.

Revix is backed by JSE listed Sabvest and offers access to all of the individual cryptocurrencies and bundles mentioned in this article.

The what, why and how to invest in Uniswap