AMC CEO Adam Aron has revealed on Twitter that the theatre chain is still well on track to add DOGE and SHIB as payment options, with the release being “most likely in March.”

Adam Aron, the CEO of AMC, soon confirmed that Dogecoin would be joining the lineup as well in the future. At the same time, Aron also held a poll asking his Twitter followers whether the theatre chain should also accept Shiba Inu.

The poll was met with overwhelming support, and the CEO announced in November that SHIB is also coming to the platform in around “60-120 days,” in collaboration with BitPay.

BitPay is a popular crypto payments processor that recently added Shiba Inu as one of its offerings, on request of none other than Aron himself.

Related Reading | Bitcoin Plummeted by 10% in 8 Hours! How do We Survive the Cold Winter?

As SHIB and DOGE being accepted by the biggest theatre chain in the world is huge news for the adoption of the memecoins, the community has naturally been curious about when AMC will finally being taking them.

Yesterday, Aron decided to break silence and answer to his followers who have been asking about it, in a tweet.

“I have been repeatedly asked when AMC expects to routinely accept Dogecoin and Shiba Inu for any and all payments made via the AMC web site and mobile app,” opened Aron.

“I am being told that we are still well on track for the promised Q1 implementation, with exact timing most likely in March,” revealed the CEO.

At the time of writing, Dogecoin’s price floats around $0.1566, down 10% in the last seven days. Here is a chart that shows the trend in the price of DOGE over the last five days:

SHIB is currently trading around $0.00002962, down 14% in the same period. The below chart shows the trend in the price of Shiba Inu in the past five days. 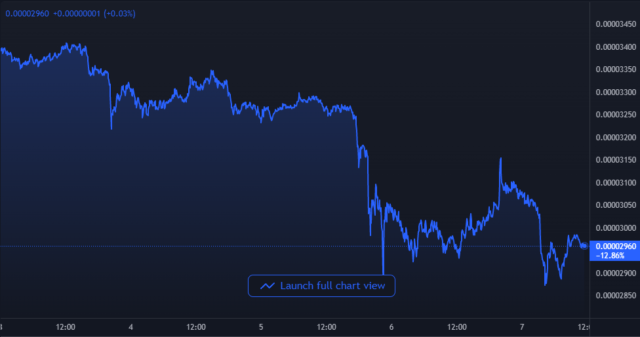