Assessing the Q3 performance of the decentralized finance (DeFi) ecosystem, CoinShares found that while the total value locked (TVL) of DeFi protocols increased by just 3% within the 3-month period, revenues across the various sectors that make up the DeFi ecosystem fell by 44% on a quarter-on-quarter basis.

Acknowledging the impact of the downturn in the global financial sector on the cryptocurrency market in the last quarter, CoinShares found that in addition to a decline in DeFi revenue, NFT revenues fell by 70% in Q3.

The gaming sector suffered the most brunt as revenue fell by 98% since Q2. The joint revenues of Infrastructure Bridges and Liquid Staking platforms totaled $20 million, declining by 34% in Q3. Generally, total sector revenues dropped by 64%.

Interestingly, CoinShares found that Q3 was marked by a growth in the TVL market share of non-Ethereum chains. With $25 billion held in these chains in Q3, their TVL market share rose to 40%.

In Q2, non-Ethereum chains held just 36% of the total TVL across DeFi protocols. According to CoinShares, this was attributable to the collapse of the Terra ecosystem, which led to a “sharp rise in Ethereum’s market share.”

In addition, of the six sectors that make up the DeFi ecosystem (Lending, decentralized exchanges (DEXes), Bridges, Asset Management, and Staking), the Lending sector logged the highest TVL in the 90-day period under consideration.

With regards to trading volumes on DEXes, Uniswap [UNI] remained the “market leader” with 51% of the market share. It was closely followed by PancakeSwap[CAKE] and Curve [CRV] with 13% and 7%, respectively. 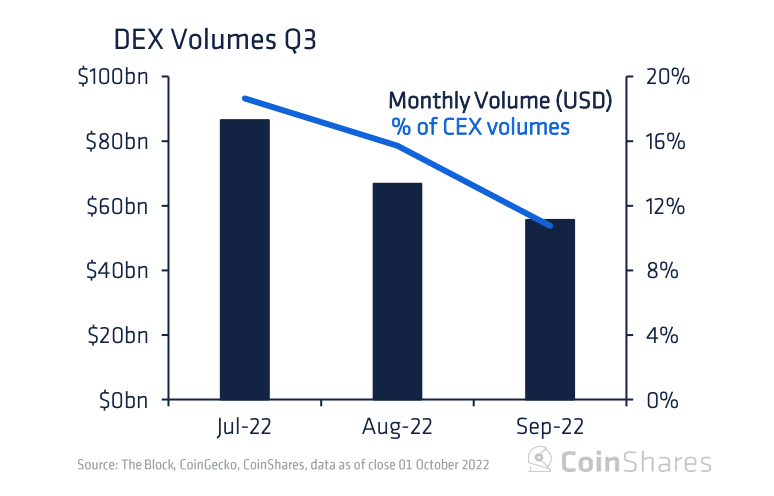 In addition to DEXes, another sector within the DeFi ecosystem that suffered a decline in Q3 was the Lending sector. As contained in the report, the total revenue made by lending protocols in Q3 equaled $11 million, a 53% decline on a quarter-on-quarter basis.

Interestingly, a sector within the DeFi ecosystem that continued to see growth in the last two quarters was the Derivatives sector. According to CoinShares,

“Over the last two quarters, nearly $250 billion of volume has been traded on decentralized derivatives exchanges. High trading volumes, scalability of Layer 2s, and a large suite of financial products (options, perpetual futures, structured products, etc.) have led to the sector’s success.” 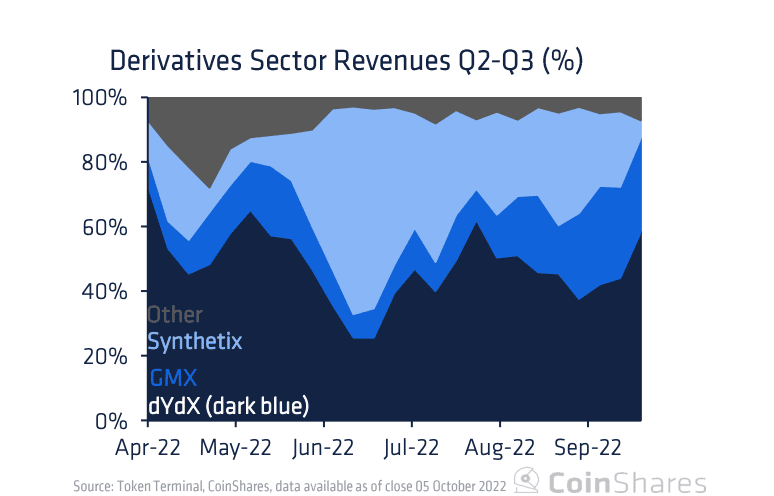