Polkadot published a tweet on their Twitter page in which they highlighted various proposals that were focused on big network enhancements that were going to be implemented in the near future.

In their official statement, they went into detail about further features that members of the network may expect to see implemented in the coming days.

The network is implementing Asynchronous Backing in an effort to decrease block duration (from 12 seconds to six seconds) and improve finality.

Parathreads, a parachain that operates on a pay-as-you-go basis and makes it simple to create a blockchain and deploy a smart contract, has also been proposed.

The group also proposed replacing the council and technical committees with the Polkadot Fellowship and subjecting all community decisions to referendums.

This metric seems to agree

An examination of Santiment’s development metric revealed a very busy period of development (with a score of 86.14). Developers are clearly putting forth the effort, and more features will likely be released soon.

In addition to the metric being high, the line also showed an upward trend, which indicated that development activity was on the rise and would likely continue to be so.

An examination of the chart revealed that the share price of DOT did not react favorably to the announcement of the new features. At the end of trading on 6 October, the token was worth $6.34, down from its $6.44 opening price.

According to the trend lines, the altcoin was unable to push through the $6.85 resistance level. At first glance, $6.10 seemed to be holding as a solid support level.

As per the graph, there has been little in the way of decisive upward or downward movement recently, and movement has largely been sideways. 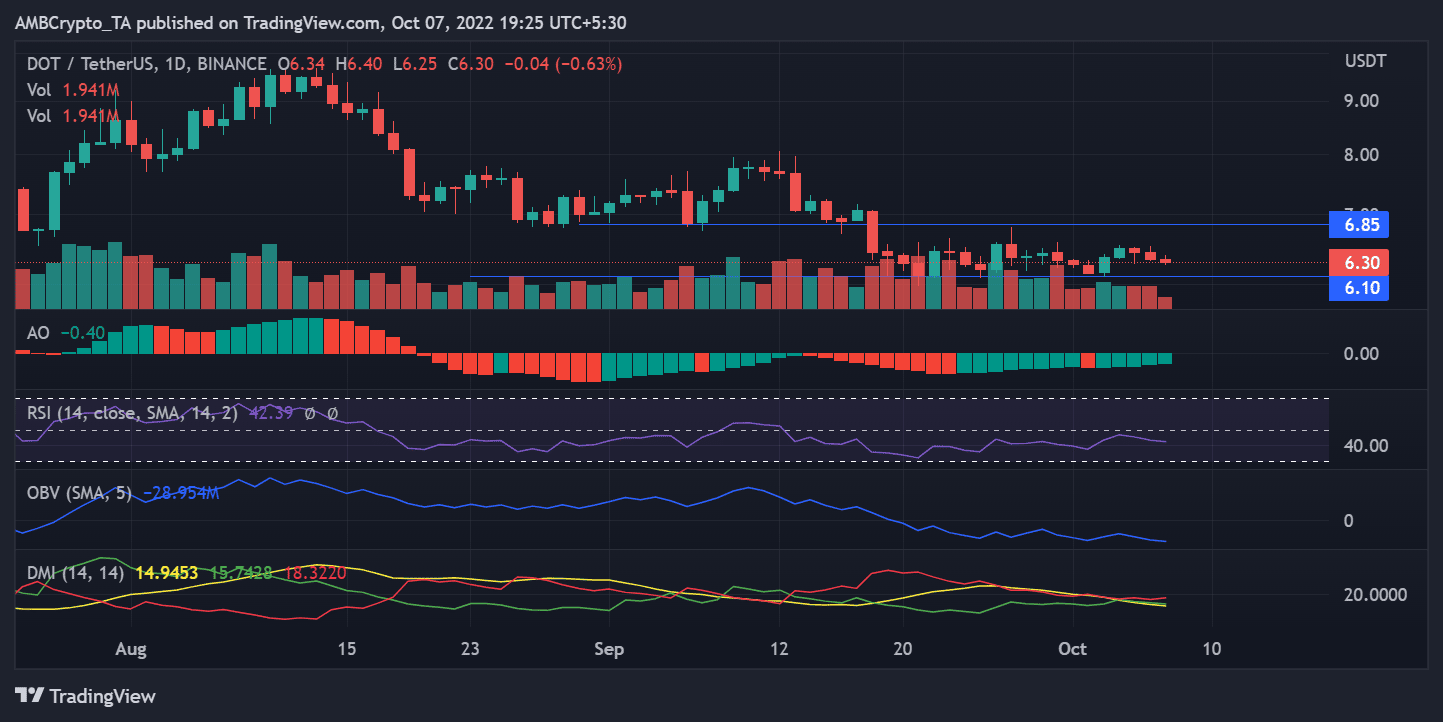 By and large, the DOT market is exhibiting bearish momentum as measured by the Relative Strength Index (RSI) and the Directional Movement Index (DMI).

The RSI line was found to be below the neutral line, while the signal, plus, and minus DI lines were all found to be under the 20 level in the DMI. Despite this, the signs suggested that the bear trend was not very robust.

When these updates are released, Polkadot is sure to see a rise in its user base. Inevitably, this will have a favorable effect on the DOT’s price movement, allowing long-term DOT holders to cash in.

However, in the medium term, any additional rally for the coin will depend on it breaking the existing resistance.